At SDBF Building Consultancy, we are privileged to play our part in helping conserve a variety of historically important buildings in the region and here are some examples of recent heritage projects.

Historical background St James’ was built in 1786 and attributed to the architect James Wyatt. Gothic in style, it sits midway down ‘The Street’, the main road through the picturesque village of Milton Abbas, which was in turn designed by the prominent 18th century landscape designer, Capability Brown as part of his re-imagining of Lord Milton’s estate. The church is designated Grade II* by Historic England. It holds national and international significance through its association with both James Wyatt and Capability Brown.

Our involvement The south aisle is a Victorian addition to Wyatt’s original building and has a lean-to roof covered in natural slate which abuts the south wall of the nave with stone parapet walls to each end. The roof has suffered leaks for a number of years and previous attempts at repair have proved unsuccessful. It is the church’s primary community and events space and as such, helps the church generate funds. We were instructed to design, specify and manage re-roofing works in order to resolve the leaks and bring the south aisle back into use as a community space.

We carried out a survey and instructed opening up works, the findings of which helped inform the contents of our specification. Works are to include stripping and re-covering the roof, re-using the existing slate coverings, over a new underlay felt and battens. The parapet coping stones are to be removed and re-laid over a new lead DPC. We tendered the works package to contractors with heritage experience and have obtained ‘List B’ consent (a form of Faculty consent, the ecclesiastical equivalent of Listed Building Consent) on behalf of the church. We have also been assisting the church in applying for funding from grant-making bodies, such as the Dorset Historic Churches Trust.

Fundraising is ongoing and, whilst we hope to be able to deliver the full works package, we have been exploring the option of carrying out the roof repairs in sections should the fundraising target not be met.

Historical background The College of Matrons was founded by Seth Ward, Bishop of Salisbury 1667–89, in 1685. Using his own funds, the Bishop built an almshouse in the Close for ten widows of priests episcopally ordained in the Diocese of Salisbury. It has been supposed that the college building was designed by Sir Christopher Wren, but in fact there is no evidence for this.

Our involvement Last year we oversaw repair and re-decoration works to all buildings belonging to the College within the Cathedral Close in Salisbury. The College had a quinquennial survey carried out in 2020. The works package was designed to address items of repair recommended within the survey report, and included timber repairs, external re-decoration, replacement of spalled bricks and re-pointing in lime mortar. The works were tendered, and a contractor appointed to deliver the project during the summer of 2021. As our offices are located within a two-minute walk of the site, we were able to monitor progress closely. 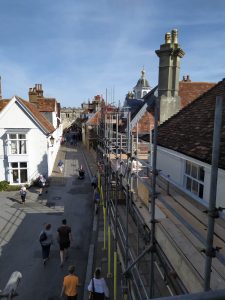 The brick repairs and re-pointing proved a particularly successful part of the project with a high standard of workmanship being achieved. The preparation of trial mortar mixes and the approval of brick samples was key in ensuring the new repair work blended in with the existing masonry. A solution of fuel ash mixed in water was applied to the replacement bricks to imitate the effect of pollution and weathering and help produce as close a match as possible.

During the project, we had hoped to make use of the scaffold access to the cupola to re-gild the weathervane. However, the vane and the globe it sits upon were found to be in worse condition than anticipated. It became clear that further investigation would be required to better understand the vane’s construction and the options for repair, so the decision was taken to defer works to the weathervane until later this year.

Church of All Saints, Burbage

Historical background Burbage is a village and civil parish in the Vale of Pewsey, about six miles south of Marlborough. A priest is recorded in the Domesday Book, indicating that a church stood here in 1086. This was probably a Saxon foundation, associated with the 11th century estate of Burbage. The church has undergone a number of changes and alterations down the centuries, until in 1853, it was decided that a new church was needed and the existing one was largely rebuilt in patterned stone and flint. All that remain of the old church are the west tower and its porch.

Our involvement The church contacted us to help deliver a project to alter and improve their coffee corner. Currently, the facilities in the coffee corner are inadequate, the cabinetry is of poor quality and both cupboard and worktop space are lacking, making it difficult to host events in the space.

We are working to re-design the coffee corner with new, high-quality and bespoke cabinetry to provide a more functional setting for church coffee mornings and other events. The cabinetry will be designed to a standard worthy of its church setting while remaining discrete. We are preparing sketch proposals with different layout options for the church’s consideration and approval. Once a design is agreed, a full set of drawings and a specification, both for the cabinetry and associated mechanical and electrical alterations, will be prepared and submitted to the Salisbury Diocese DAC as part of a Faculty application. We will also invite competitive tenders and recommend a contactor to the church.

We are proud of our part in conserving and improving buildings like these, and ensuring, not only that they have a secure future, but also that they are able to be used and enjoyed in the present.

This website uses cookies to improve your experience while you navigate through the website. Out of these, the cookies that are categorized as necessary are stored on your browser as they are essential for the working of basic functionalities of the website. We also use third-party cookies that help us analyze and understand how you use this website. These cookies will be stored in your browser only with your consent. You also have the option to opt-out of these cookies. But opting out of some of these cookies may affect your browsing experience.
Necessary Always Enabled
Necessary cookies are absolutely essential for the website to function properly. This category only includes cookies that ensures basic functionalities and security features of the website. These cookies do not store any personal information.
Non-necessary
Any cookies that may not be particularly necessary for the website to function and is used specifically to collect user personal data via analytics, ads, other embedded contents are termed as non-necessary cookies. It is mandatory to procure user consent prior to running these cookies on your website.
SAVE & ACCEPT